The main wedding reception was held in the huge barn which was smarter than so many others we had seen, it meant guests were all in one place and not scattered around which meant when the party came about the energy stayed very much in the room! We wanted a Scottish / Swedish fusion wedding as Paul is Scottish and I’m half Swedish. We reflected this firstly on the invites (using traditional Swedish dala horses as the emblem for the wedding but with colours taken from the “Donnelly” tartan which we had handmade in Scotland.

We decided to have just a 2 course meal followed by a whole room of cakes and desserts to keep the energy up. We had been to a few weddings before when we were both full and itching to get going by the time dessert came around! 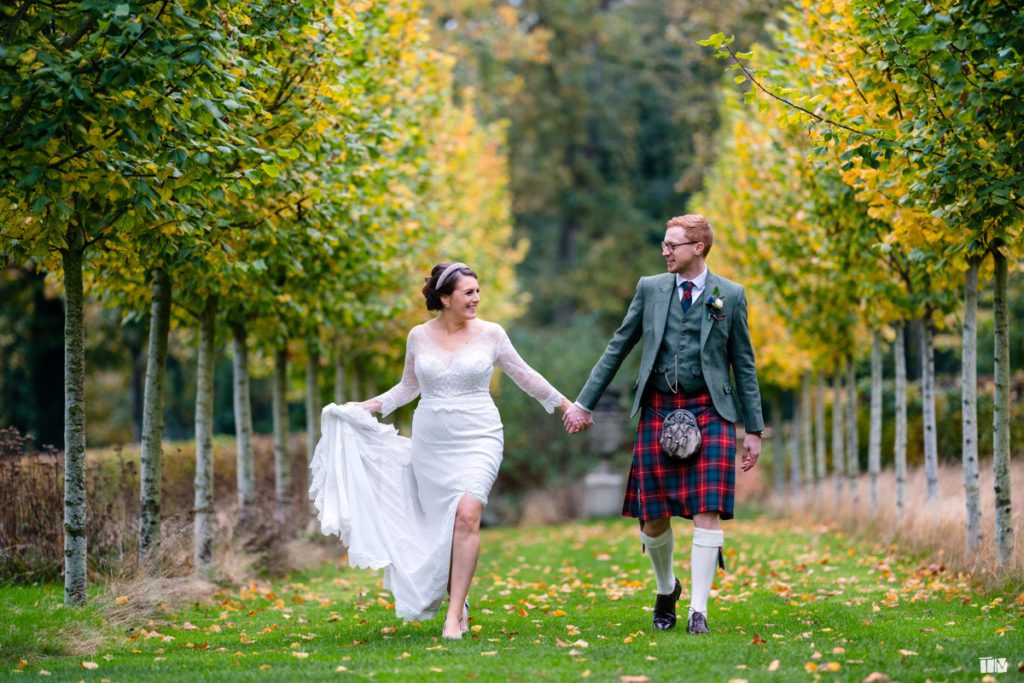 We did plenty of games including traditional Swedish games, these include the “shoe” mr and mrs game and another when the bride leaves the room, the MC rings a bell and all the women in the room have to run over and kiss the groom, when the groom leaves the room the bell rings and all the men do the same for the bride. This can happen at anytime throughout the meal so it gets people on their feet and it’s really funny to watch.

A Scottish tradition was oathing stones, each guest takes a stone and holds it during the ceremony while the vows are spoken, at the end, stones are thrown in the “loch” by way of sending your love to the couple. We had the lake at Oxnead so all guests threw their stones in after the ceremony! We also held the stone during our vows and this is based around the idea that your vows are “set in stone”

Favours – we made Scottish blackberry whisky and Swedish dala horse ginger breads. Our amazing bridesmaid, who is a leather crafter, also made a personalised named key ring from dark green leather for each guest with the dala horse stamp. Guests LOVED them and most of my friends use theirs everyday! 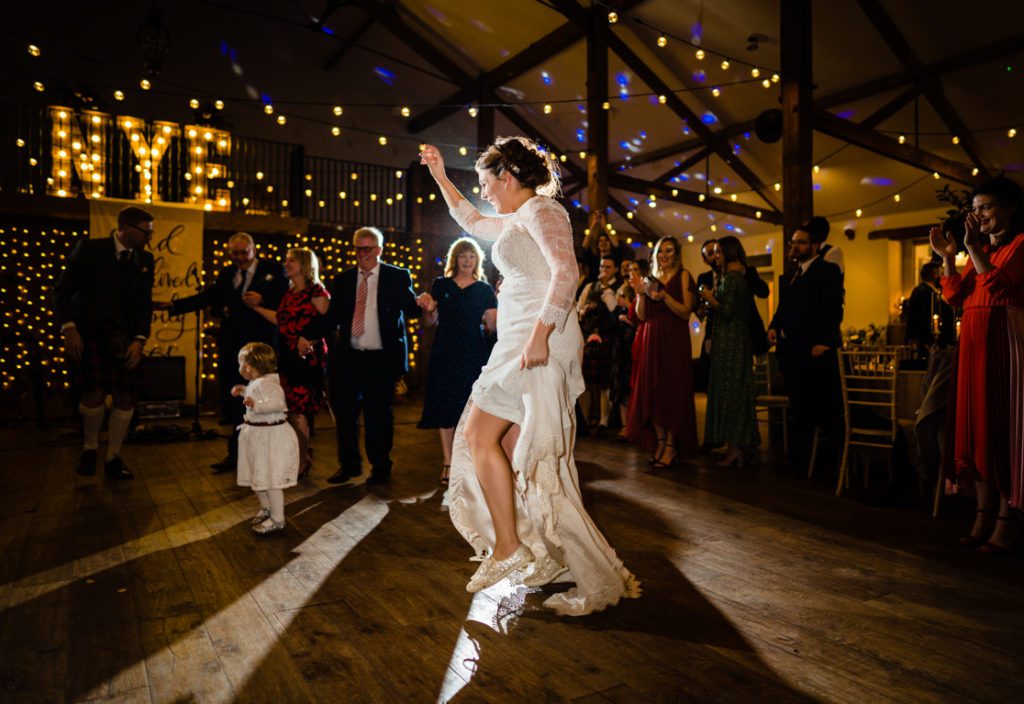 We had amazing music. This started with a cellist for the ceremony and a bagpiper led all guests down to the drinks reception in the orangery after the ceremony. He continued to play on and off during drinks and the sound was beautiful, it carried around the whole grounds of the venue.

We later had a DJ through dinner, which lifted the mood, then a saxophonist and electric violinist playing with the DJ, which was epic, then a band at the end. The music made the whole party.

The other theme of the night was New Year’s Eve. Paul and I met on New Year’s Eve but to get married on that date was crazy expensive! So we did a fake New Year’s Eve With big “NYE” light up letters on the balcony, a piper piped us into the wedding breakfast to Olde Lang Syne and we did a 10-1 countdown when we cut the ribbon going into the “dessert room”

We had homemade traditional Swedish princess cakes (National cake of Sweden) and lots of other Swedish desserts.

Flowers were done by my talented friend Catherine of @theweddingboutiquebloom. We sourced Swedish birch branches and built handmade tall birch centre pieces. The flowers were stunning. 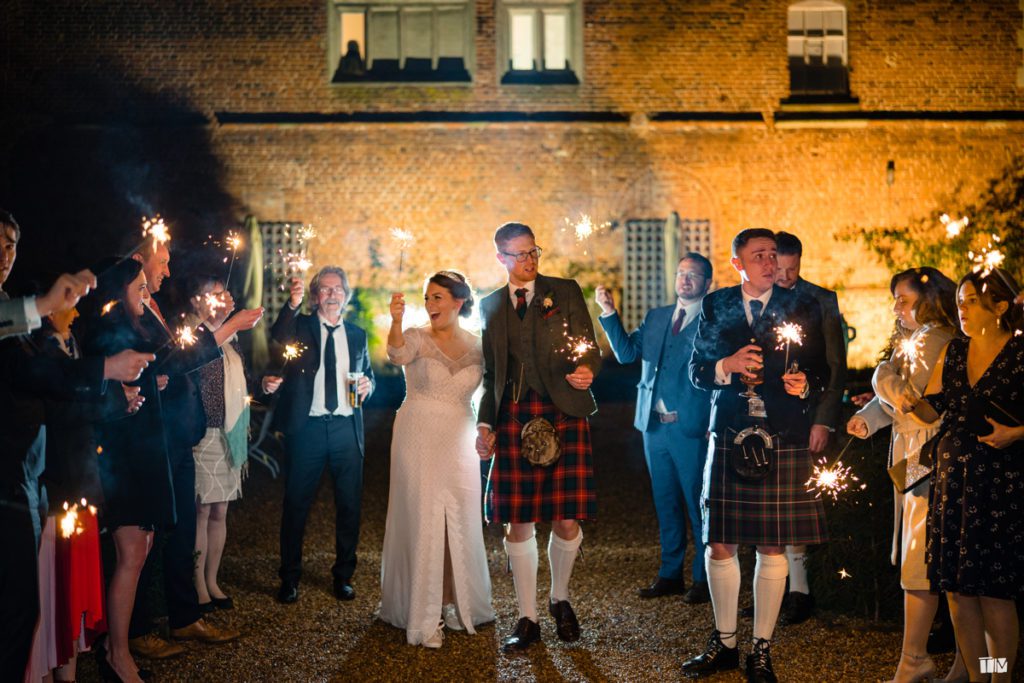 I have never been hugely body confident and for me finding a wedding dress wasn’t the dream I had hoped for when shopping in traditional shops! Although many styles were nice, I was often clipped into a dress far too big which didn’t give me an indication of how I would look – or a dress 3 sizes too small which made me feel enourmous and I wanted to get them off immediately! None of them filled me with the feeling that I wanted to make the biggest dress purchase of my life!

When I was introduced to Lisa I found the whole process so much more comfortable and reassuring. My dress would be fitted to me and I didn’t suddenly feel I’d bought a dress off the shelf that I’d have to starve myself to get into and have the fit as an added pressure.

I had some ideas of the designs I liked and felt totally involved in the process of making my dress. I could literally pick elements of dresses I liked and piece them together and Lisa sourced the most incredible collection of fabrics, laces and trims to choose from. If something wasn’t quite right I could change it at anytime, it was amazing to see from one fitting to the next, the vision come together.

I can’t recommend bespoke enough – this is your day to feel incredible and to have something made from scratch just for you is so special. I was comfortable all day and didn’t have to worry about any elements of the dress as we had thought through the dress to fit my day plans (dancing / heels and flats etc!)

"THANK YOU SO MUCH FOR ALL YOUR HELP WITH MY DRESS. IT LOOKED GREAT AND GOT MANY LOVELY COMMENTS. THE EXPERIENCE I HAD WITH YOU WAS GREAT, YOU'RE A TRUE PROFESSIONAL"

“THE WHOLE EXPERIENCE WAS PHENOMENAL! LISA MADE EVERYTHING SO RELAXING AND ENJOYABLE …… I WOULD RECOMMEND HER A THOUSAND TIMES!”